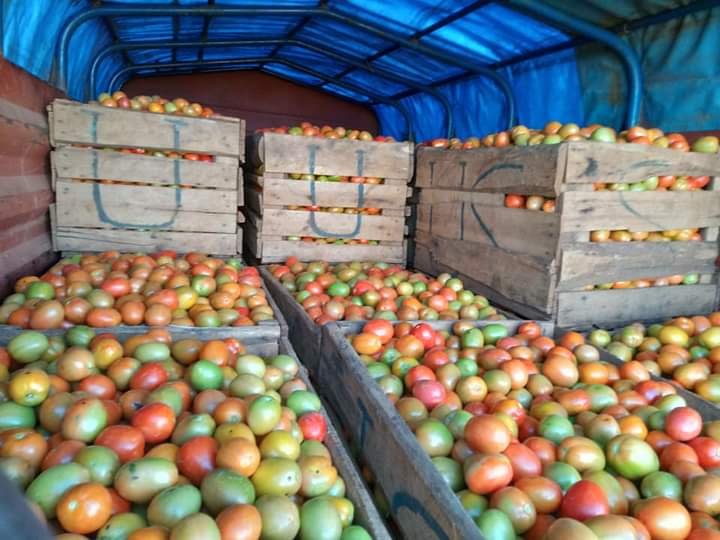 FROM the basic agriculture he learnt during his school days, Bulawayo businessman Mr George Kudya (42) set off with a few bags of certified seeds and fertiliser to plant potatoes on a leased small portion of land in Montgomery, Umguza District.

Today, after investing US$1 million into the venture, Mr Kudya is a successful farmer cultivating over 100 hectares of land on various sites in Umguza District, Matabeleland North Province.

He specialises in potatoes and tomatoes.

He is now in the process of establishing his own shop at the marketplace.

Mr Kudya, who uses centre pivots to water the crops by drawing water from Umguza River, wants to fulfil his dream of being one of the country’s biggest producers of potatoes.

When he started the farming business in 2017, he only had two hectares of land at his disposal.

“I grew up in Honde Valley in Manicaland and farming was a tradition in our family. In fact, I intended venturing into mining sometime in 2017 because I had friends from Durban who wanted to invest in mining,” he said.

Mr Kudya said while in the process of looking for a mining area, he was directed to Montgomery where there was a place, which could be turned into a gold mining

“Upon my arrival, I discovered that the land was ideal for farming not mining. Somehow, I started looking for the owner and managed to locate him. He, however, refused to lease out the land, saying I was too small to venture into commercial farming,” he said.

“I pleaded with him to at least give me a hectare or two and he grudgingly agreed and eventually offered me two hectares.”

Apart from the land he is leasing, he was allocated a plot measuring 27 hectares from where he planted winter wheat and cabbages. He has since applied for a farm.

“I have since been getting more land and the land I am operating on now is beyond 100 hectares on various sites in Umguza District. I have finished planting 27 hectares of potatoes, 8 hectares of tomatoes, three hectares of onions, a hectare of carrots,” he said.

Mr Kudya has started harvesting potatoes, while 127 000 plants of potatoes covering 15 hectares have started germinating and are at growth stage.

A pocket of 10kg potatoes costs between US$5 and US$6 depending on demand in the market.

Mr Kudya said while potato farming is a lucrative and profitable venture, it is also highly capital intensive and so far he has invested US$1 million into the project.

“When I started farming capital wasn’t much, but my growth was not centred on returns from the produce. These are resources which I acquired outside farming with the belief that there would be results,” he said.

“It costs between US$4 500 and US$6 500 per hectare of potatoes produced, which is too much for us small-scale farmers, but the high returns offered and the short production period facilitate rapid establishment of cropping programmes and enhances farm development.

“With the amount of investment I have made, I can safely say from this year I will start reaping the results. The two pivots which I have purchased cost me nearly R2 million, there is also the issue of the pipeline, pumps, transformers and all in all, this modern irrigation system cost me about US$1 million,” he said.

“For me failure is not an option because I have taken money from somewhere else and that money has to go back. The passion and drive for farming is what make this project tick.”

Mr Kudya employs about 70 people in all his farming units both on contract and permanent basis. He said the numbers go up depending on the amount of work at any given time.

“My ultimate goal is to create as much employment as possible within the supply chain and adding value along the production chain. We are also trying to incorporate animals into our matrix because crops and animals interrelate,” he said.

“From animals you collect manure which can enable soils to improve. The same applies with crops we also get feed for the animals.”

Mr Kudya, a holder of a degree in Entrepreneurship and Business Leadership from Lupane State University, said he grew up in the rural areas where farming was the backbone.

“I virtually knew nothing about potato farming, but I had the belief that I could do it. A certain potato farming expert whom I had approached suggested that I read a lot of books on potato farming and the diseases that affect them,” he said.

“I made it a point that during my spare time I researched on potato farming and YouTube was my mentor. I would also read about the Israel irrigation system, Netherland’s production of potatoes, their diseases and the processes involved and it took me about three months.”

Since then, Mr Kudya has managed to expand to other areas in Umguza District and diversified to tomatoes, onions and cabbages.

Potatoes are in high demand in Zimbabwe due to changes in consumption habits, with the local production failing to meet demand.

The crop is a source of carbohydrates and starch which are essential nutrients. There is increasing demand for potatoes in urban centres with about 65 percent of the potatoes supplied to urban centres being processed into chips in fast food restaurants and hotels.

Mr Kudya said it takes between 90-120 days to harvest potatoes depending on varieties.

“If we achieve our vision of supplying potatoes daily then it will also expose the opportunity for us to export because we will be having excess. Like any other business, farming has risks involved such that you might end up not getting the expected yields,”

“When it comes to harvesting there are many elements which come into play such as the agronomic practices, the quality of the soil and the seed on its own among other factors.”

Zimbabwe has a well-established history of potato production. Apart from giving high returns per invested dollar to the farmer, the crop contributes significantly to the nation’s food security.

As such, Government declared potatoes as one of the strategic crops to enhance food security at household and national levels.

In May, Government launched the Potato Value Chain Financing Facility at Parklands Farm in Norton, which is part of the country’s import substitution intervention strategies to boost productivity and profitability in the potato value chain and expand the country’s starch options.

The programme is meant to ease the shortage of the seed potato, which has resulted in the country importing something in the region of 60 percent of its requirements mostly from neighbouring South Africa.

The shortage of seed potato was a direct result of a drop in production of seed from the Nyanga quarantine area.

This increase reflects continual growth in local consumption of potatoes. So lucrative has potato production become that farmers are now focusing on export markets to generate foreign currency needed for the procurement of major inputs for them to remain viable.

This high level of production requires a strong seed supply system if the national target of planting 20 000ha of potatoes annually or even more is to be achieved.

The Second Republic has made food security a top priority and is working towards a US$8,2 billion agriculture industry economy by 2023, underpinned by the country’s National Development Strategy 1 (NDS1) — the driver towards Vision 2030 to make Zimbabwe an upper middle-class economy.

adapting to your market